The business condition index, BCI for Q4 2011 has been released by Malaysian Institute of Economic Research, MIER about 2 weeks ago. Regardless of how the government is trying to convince you that we are “doing okay”, the data shows overall business climate in Malaysia is getting worse in Q4 compared to Q3 2011. See my previous post on Q4 2011 BCI.

The gist of it: BCI slipped below threshold level of 100. This shows contraction. Other highlights: 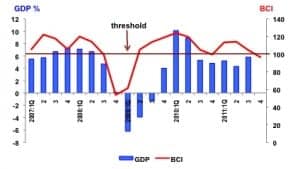 On the same note, Bank Negara Malaysia maintained the Overnight Policy Rate at 3 percent during the recent Monetary Policy Committee meeting on 31 Jan. This is expected because of the current business cycle we are in.

However, it issued a contradictory statement which reads:

********
In the domestic economy, it said, the latest indicators pointed towards continued expansion in the fourth quarter of 2011.

The central bank said growth was driven by sustained domestic consumption and investment activities, while the external sector showed signs of moderation.

“Looking ahead, the economy is expected to continue to expand, underpinned by sustained private sector economic activity and further reinforced by public sector spending,” it said.

Meanwhile, Bank Negara said employment conditions were expected to remain stable while the outlook for domestic-oriented sectors will continue to be favourable.

So, who do you trust? Bank Negara statement or MIER data?

Also, I’ll watch the eggs in my baskets *really* closely now, especially when it comes to paper assets. It could be the time to go defensive right now by slowly switching into high dividend yield stocks or bonds.