Everyone has a mentor in one way or another; how about the Millionaire Teacher – Andrew Hallam? Would Andrew become financially independent at 41 years old if not for that fateful friendship with his own version of Rich Dad?

Also in this fourth episode of the exclusive interview with the Millionaire Teacher, Andrew weaved a heart-warming story on how one man makes vast difference in the lives of many in India and Cambodia.

He is a hero in his own right, and I think, deep down, he might have always wanted to be this Marvel superhero. You have to listen to the man himself if you want to understand what I meant. 🙂 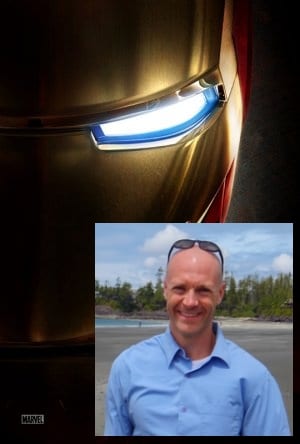 CF: Andrew, I read about one of your financial hero, Russ the mechanic…

CF: (Do)You think your financial sense  would be any different if you did not meet this guy, Russ the mechanic when you were 19?

Andrew Hallam: It’s so funny you said that…I have a feeling <pause> if I had not met Russ…I probably would only have one quarter of the net worth I currently do.

Andrew Hallam: Yea, it was just the right time at the right place. I was young. I was very impressionable. And I was very… very impressed. This guy was so honest with me. That was one of the thing that was just so darn inspiring. He said to me “Come on up to my house” and we actually became friends. And he brought out his statements. He brought out his investment statements. We really chatted about how he ended up building this portfolio. He took me around, and he likes single family homes.  He owns a whole slew of family homes in Victoria British Columbia today. Those homes are worth quite a bit of money. He took me around and showed me the homes and he taught me, yield….the whole concept of rental yield. He’s a really opinionated guy, very entertaining in retrospect. Because he really recognized so many educated people weren’t  financially educated. He was the one who taught me about real estate yield. And back to your original question, there is no way I had anywhere near the money that I had today if that wasn’t for me meeting that one guy.

CF: Did you meet Russ after day?

Andrew Hallam: You know, I didn’t actually seen him for years. But, I wrote an article called….it ended being titled “How I Got Rich on a Middle Class Salary” and actually ended up writing about him. I think it was 2005..and it ended up being nominated a finalist for National Publishing Awards in Canada. And so, family members ended up phoning him and said “ Russ! Russ! You are in this national magazine!”  I hadn’t seen him for really long time. And I ended up going to Victoria ..probably hadn’t seen him for …may have been, at least a decade. At least 10 years. And I just drove up to his house…there he was in the front yard…and he runs into the house, brings out the magazine…he was  really excited [to see me]. It was fun too – I actually phoned him…what I did was…when I wrote the book…it was funny, because the publisher  actually asked me, “Okay now, you put this cartoon in the book, do you have the permission for the cartoon? You have the license for it?” Yes I have licenses for all that. “How about the Russ Perry guy? Do you have word from him that this is okay? To have him in the book?” I thought, “Jeez, I don’t” So I phoned him and I said, “Hey Russ!” He was really… really happy. He was really proud. We have this great conversation. And I said to him, “You realize what you did? Because of you Russ…” This was really cool…it really touched him. I said, “Because of you, there are hundreds of families, in Cambodia right now, that have fresh drinking water that they never would have it” I said, “Russ, because of you, there are girls in India, who could actually afford to go to school. Never would have been able to”. So what happened was, Russ inspired me, and I was able to amass my wealth. I ended up with, really more money than I need, and the word here is, NEED. And I was able to look around and see that, there are people in this world who really could use some help. And I am not talking about giving people money and actually weakening because that really is what ended up happening. But give people money so that they could learn to read and write, that strengthens them. To give an organization money that would build wells for freshwater …everybody in this world has a right to freshwater well. And I think he actually became quite emotional when I told him that,” Indirectly …without you realizing this, you have actually contributed to this by educating me. “

CF: That’s really a heartwarming story to hear. It really is.

Andrew Hallam: And my hope too is …And I said this to Russ, I said, “I am teaching this personal finance class now”. Part of it is about stewardship. If you amass wealth, one of the great things is sure [???], great….you are financially independent, wonderful. But at the same time, stewardship. Actually helping other people with your good fortune. So I said to Russ, “Think about, all the students that I am now impacting…” and the people who they, in turn, if I do my job right, will actually be able to help. I pointed out to him and said “It’s amazing how far just one man, and how many people one man can influence. “

CF: Andrew, do you plan to retire? Or I phrase it in another way – what is your retirement plan? And what would you imagine yourself doing when you do retire?

Andrew Hallam: Right now I am just having so much fun just doing the job that I do. I absolutely love it. And I’ll do that as long as I enjoy it. Here’s the beauty of being financially independent, which I am – I have that option. The moment the job doesn’t become fun, <pause> I move on. I can move on to do another job, I can move on to do volunteer work, I can move on a while to travel the world. It’s great just  the options that it actually gives me. So I don’t have an actual date where I’d say “Alright, there’s a point in time where I am actually going to do nothing” . Probably I’ll do something when I actually do retire. If I do, sort of decide, not to not do any work at all,  I’d probably set a goal to do something like an ironman at age 70 or something crazy and fun.

CF: And you will definitely be in the headline!

Andrew Hallam: <Laughs> I won’t be the first 70 years old to do the ironman. There’s lots and lots of guys are out there doing that kind of thing and that’s inspirational.

If you are entertained or inspired by this, consider sharing it.