Have you ever wondered that, you would have accumulated more wealth by now if you were more financially aware in your early twenties?

Is the culture of spending really so ingrained in all us which makes it futile to resist the temptations around us?

What does Andrew truly find rewarding in his noble profession as an unorthodox educator? And what he really values the most in life? (hint: it’s not money, but it is a result of  being financially free)

Here is the second episode interview with the Millionaire Teacher. 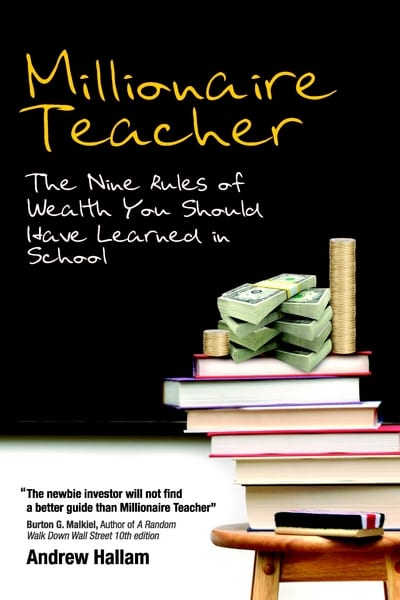 This is a book which I have read and would really recommend it to you. It had received scores of accolades from various sources.

CF: Having a basic financial education…do you think it would be effective to shield us from all those temptations?

Andrew Hallam: I think it would help. I don’t think that it would a foolproof thing. To an extent, it’s a hardwired thing that takes place too in certain people. Certain people easier to convince them to…let’s say, exercise.

Andrew Hallam: Certain people are just going to be able to be convinced…that they are going to actually going to enjoy it more than others

Andrew Hallam: Yea, exactly. It’s the same with saving money. There’s some people that you can actually convince …that hey, delayed gratification is important …so…you can actually have choices further on in life..and then there’s people who just give in to it, like a drug. And I think financial education would really help. I think you would get fewer  people falling into it accidentally…falling in  debt accidentally…you know, I think you are always going to get that percentage who doesn’t matter what kind of education you are going to give…who, just really don’t have the discipline.

CF: So, if, ermm, let’s say, it’s a fact that financial education – we don’t learn that in school. And unfortunately, we don’t have teachers like you. So, I mean, ultimately, I think, sometimes, this role falls back upon the parents themselves and the parents…if they are not going to teach their kids, because they don’t have that kind of awareness…so what do you think it’s going to happen?

Andrew Hallam: Yea it’s tough, you know – it’s a cultural thing too because money has been, for a long time, a very taboo subject. People don’t often talk about their weaknesses pertaining their money as well, in terms of, what fathers and mothers actually learnt and they can pass on to their children from a really young age so it has to be…culturally,  there has to be some kind of shift..you know what’s really kind of [inaudible] …interesting and kinda sad at the same time. If often takes some kind of financial calamity for a family to actually be placed into that kind of position. Where they actually share their finances with their children ..to explain that, you know, we actually can’t afford to take that trip because dad just got laid off. And it’s the same too on, erm, on a really broader scale…[inaudible] what fascinates me is … reading a lot about the Great Depression…a family that ended up going through [inaudible] … a book by John Steinbeck…have you read it?

CF: No, this particular book, nope.

Andrew Hallam: It’s really an old book…it’s a real classic ..and you know ..the family really comes together…it often takes a calamity to bring people together…like 911 brought the Americans together…you find that tsunami In Japan …and the tsunami [inaudible] in Southeast Asia..brought people  together. And often that seems to be what it  takes…and you ended up with a real financial difficulty, where the economic….the world spins downward somewhat, we go through really deep worldwide depression …family will share much more ..of their personal economic life..because they really have to with their kids..and kids kind of come away stronger because of it.

CF: Unfortunately, now we live in an age where we glorify all the hyper consumption (trend)  and stuff like that.. so kids nowadays, even younger generation like myself, I am 30 this year by the way, we just don’t feel that kind of thing you just described yea?

Andrew Hallam: Right. Yea, you’re right. You know, it’s a tough thing to actually get through because you are hammering up against a culture of spending. But one thing …when I talk to my students, ermm, …I teach personal finance class at Singapore American school … I can’t, and don’t drive up a Ferrari and said…”Look, I am good with my money so this is what I have”..But I can tell them some stories, like when I was 30, I took  a year off and I traveled. And I had enough money, I really didn’t really need to work that year. And if I chose to, I wouldn’t really had to go to work for the next 2 or 3 (years). And very few 30 years olds have put themselves in that kind of position. Often, they are behind the eight ball. The old expression. I love the old bumper sticker that said “I owe I owe. I am Off to work I go”

CF: It’s like a slave. You are a slave to your work.

Andrew Hallam: exactly Yea. So what I did tell my students is it feels really good for me to say, at the beginning of the year, “Am I going to work this year, or am I not?” Do I feel like taking some time off…to travel,  you know…time off to volunteer…and time’s a gift, it really is. When you have it, it’s probably the most wonderful asset there is.

CF: So it’s pretty much nothing rocket science – just live within your means, spend less than you earn, avoid bad debt like a plague ..and just invest the difference and do what you really passionate of doing?

Andrew Hallam: Yea I think so. You know – It is. It is a very simple…very simple concept. It’s kinda like – “Hey, you want a really good diet…I tell you a really good diet..drink plenty of water… <Laugh> Lots and lots of vegetables…and limit your sugar intake”.  It’s that simple, but it’s hard to do. And Buffett says himself…Warren Buffett …suggests that investing is simple but it’s not easy for people to do. And I think it’s the same when it comes to the discipline of saving, not spending money or too much money on depreciating assets…and rather, trying to put your money into appreciating assets.

CF: So, any ex students of yours that actually came back after a few years and said “ Hey Andrew I am glad I listened to what you thought me in a  financial sense” and  he said – “I am quite financially well off now.” I am sure you got a lot of this – I mean, students who really appreciate what you taught them in high school.

CF: I believe so. I mean, it’s just a great feeling when what you do, I mean what you write, the financial literacy that you spread around ..it really has a impact in people’s life.

Andrew Hallam: Yea it is. It’s one of the great thing on the  job I do . The teaching profession is really like that too. And if you can empower people to be proud ..and feel really good about who they are, what they’ve done…what they have accomplished…you can’t really get any bigger reward than that. It’s a wonderful thing. It’s far better than getting cash reward at the end of the day.. {inaudible}…

Stay tuned for Part 3 where Andrew talked about his criteria on property investment.